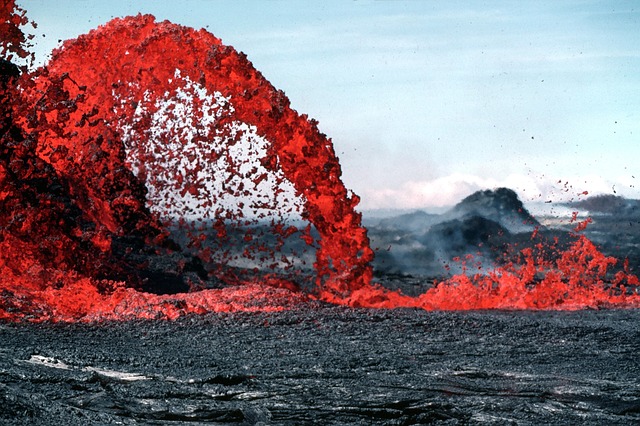 Researchers from Oregon State University (OSU), working with a team from the National Oceanic and Atmospheric Administration and the U.S. Coast Guard, have been surprised by recent research that proves that there is a cacophony of sound coming from more than 36,000 feet below the surface of the ocean. (Read “Mariana Trench: Seven Miles Deep, The Ocean is Still a Noisy Place” on the OSU website.)

It seems that instead of a sea of silence, the deepest parts of the earth are booming with sounds both man-made (e.g., shipping traffic) and natural (e.g., marine life and earthquakes).

Then there are the underwater volcanoes. OSU estimates that there are more than a million of these “submarine volcanoes” spread throughout the world’s oceans. Together they produce an estimated 75% of the annual output of magma worldwide.

Magma is a fluid mix of molten material that comes from deep within the earth. Made up of a broad spectrum of minerals and essential elements, magma becomes lava when it is ejected during a volcanic eruption. This lava cools and solidifies relatively quickly, turning into mineral-rich volcanic rock.

And while there are different types of volcanic rocks, basalt is the rock that underlies much of the Earth’s oceans. Regions of the world that are blessed with surface extrusions of basalt also have some of the most fertile soils.

Why? Because basalt is rich in iron, magnesium, and silica. Compared to volcanic rocks which are high in quartz, basalt weathers relatively quickly which means that it begins to release nutrients to plants as soon as the roots make contact. Over time, additional nutrients become available as rocks are pried apart by water, extreme temperatures, and hungry microbes that work together to release minerals into the soil and make them available to plants.

Surely, if the microbes that have inhabited the earth since the beginning of time could speak, they’d say “Feed Us. We’re Hungry!”

That’s because much of the modern world’s soil-sustaining rock material has been stripped away thanks in large part to aggressive agriculture practices (along with other sudden and extreme climate changes). Robbed of their nutrient-rich food source, microbes have less work to do and the soil suffers—as does human health and nutrition.

So what can be done (aside from Mother Nature releasing a series of violent volcanic eruptions)? One of the quickest, easiest, and safest ways of introducing minerals back into the soil is through the process of remineralization with rock dust. Not surprisingly, one of the best sources of rock dust is volcanic basalt.

Adding finely crushed volcanic basalt to the soil is as close as it gets to mimicking the Earth’s own natural methods for restoring minerals and other essential elements back to the soil. For further reading, we recommend “Soil Minerals and Microbes: A Partnership That Benefits Plants, People and Planet.”

One thought on “Secrets from the Deep: Volcanic Basalt’s Mineral Benefits Are Far-Reaching”